Browsing all articles from December, 2016

Ecogise are making progress with a project at Barnsley Metrodome . The main contractor are CD Potter & Sons who are also a local company. Works include major toilet refurbishments and a new events entrance. Works due to be completed early 2017.

We are delighted to have been awarded the contract for electrical installation at Leicester Tissue Companies new premises. Our client is HP Construction Limited and works will be complete in spring 2017.

Solar PV near completion in Boston 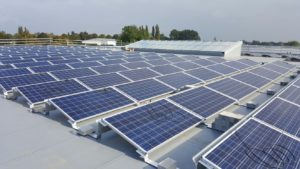 Large scale solar PV on two roofs. The first on a ballast system and the other trapezoidal.

The fallout from the government’s subsidy cuts gathered apace into March and April, particularly as installers found the going increasingly tough and the run rate continuingly drab. Even the market’s biggest players were not immune, with Lightsource confirming that as many as 80 jobs at the firm were to be “reconsidered” following the results of […]